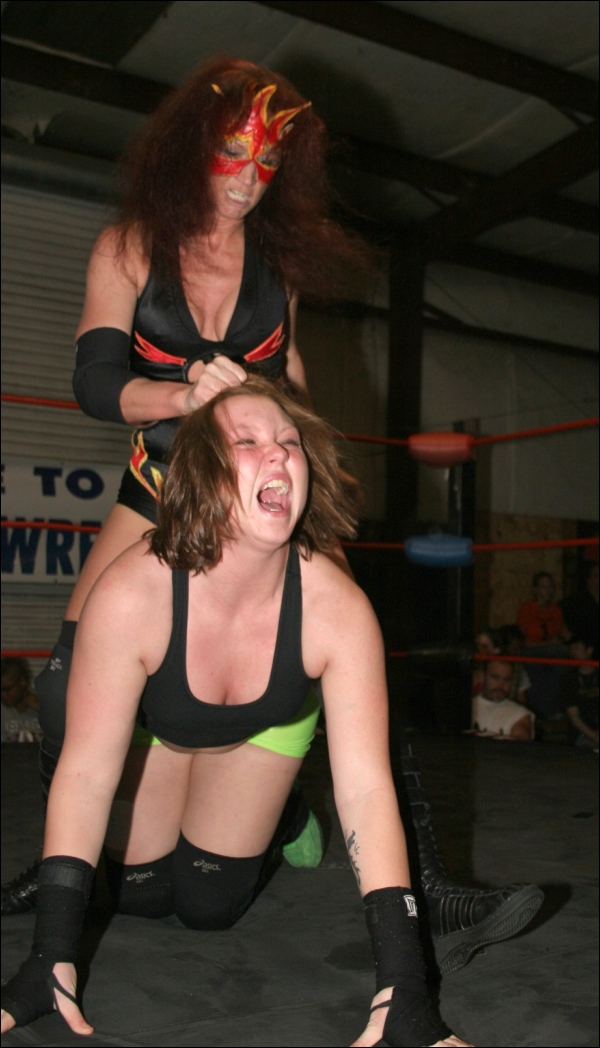 Molotov: She's Out Of Control!

G.L.O.R.Y. Girl Tasha Simone/Molotov is out of control. And we mean she's really out of control! She proved it earlier this month when she decimated poor Sarah Lynn at MLW's Tupelo, Mississippi, event. It was a vicious beating by the demented masked murderess...and Wrestlin' Wally was there to capture it all for us.

The beating begins with nothing too out of the ordinary in a women's wrestling match: a handful of hair used by one lady to control her opponent. But this one is different. The yank of hair that Simone uses to snap her opponent's head back has her young opponent howling. The sound of painful screams seems to cause something to snap in the masked wrestler's head. Take a look at Simone's snarling face: she's past the boundaries of wrestling and now in the realm of total domination! 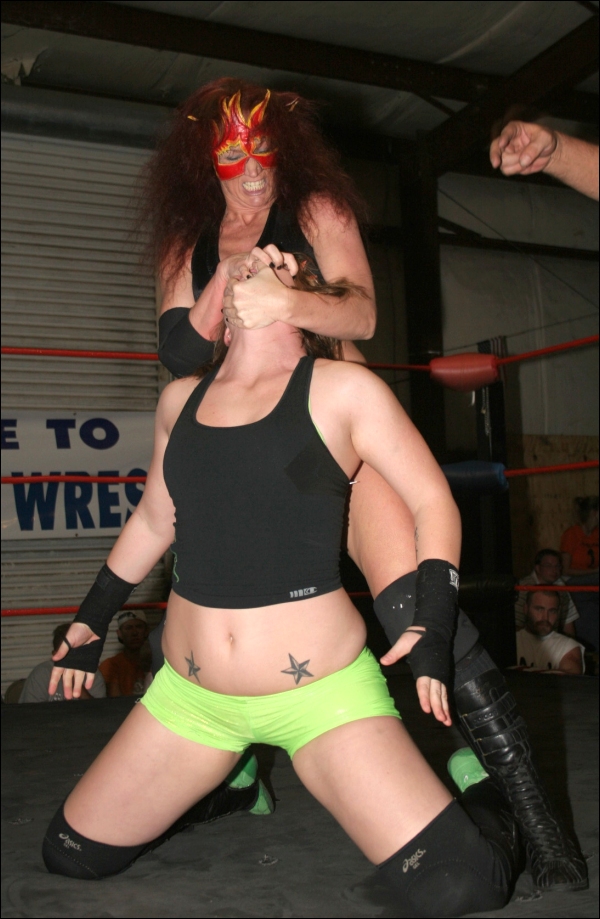 This isn't wrestling. This is sadistic punishment! Hair-pulling and a wrenched neck seem benign compared to this kind of tactic. After pulling back on the chin, Molotov digs in with her fingers and violently rakes into the face of her overwhelmed opponent. Pretty Sarah Lynn's screams of agony only drive the crazed redhead to do even more damage in trying to rearrange the pretty features of her victim. 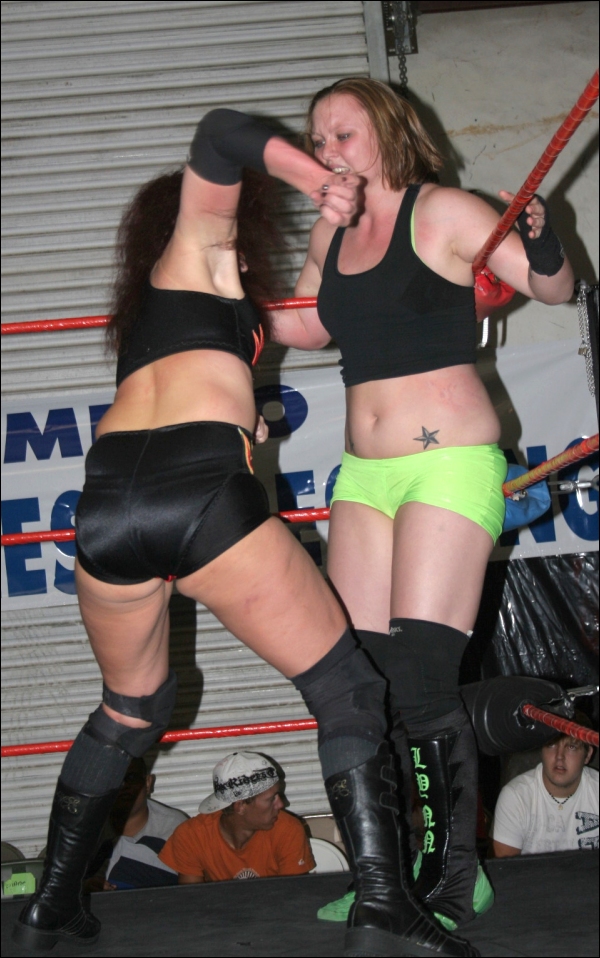 Molotov proves that she's an equal-opportunity destroyer. Not content with just working-over her opponent from the neck up, the redhead decides to pound away at the body of the already stunned blonde. Poor Sarah Lynn can only absorb the punishment as she's cornered against the ring turnbuckles and belly punched into oblivion. Simone batters that soft and vulnerable midsection with a series of right fists...it looks to us like she's using the youngster's star tattoo as a bullseye for her devastating blows! 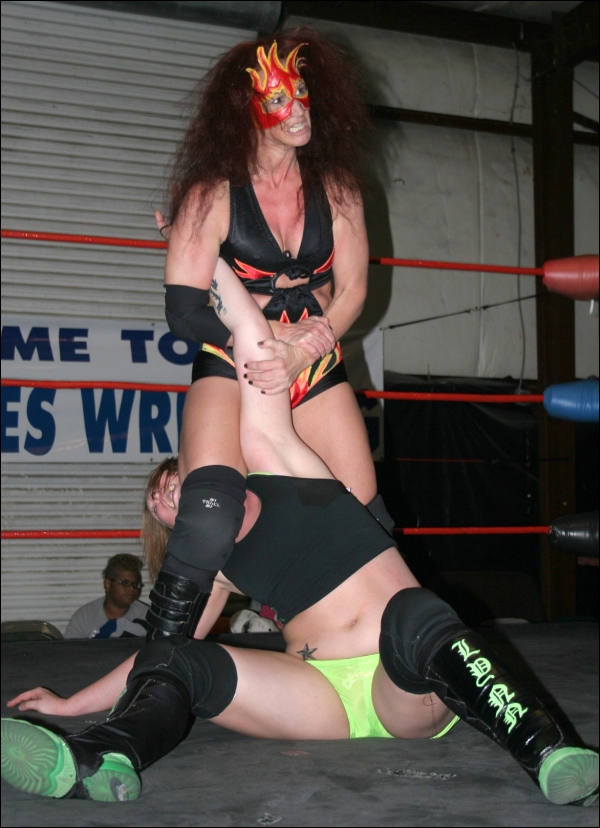 Reminiscent of Medieval times, Molotov continues on her torturous tirade by reenacting the ancient rack stretch. Forcing the head back with a leg while pulling up on that left arm, the brutal Simone delights at the screams of agony coming from her opponent. You can see the crazed look on the face of the vicious wrestler even through that flamed mask! Sarah suffers to the max as she begins to feel the muscles in her left arm, neck and ribcage being stretched and ripped apart by the terrible racking maneuver. 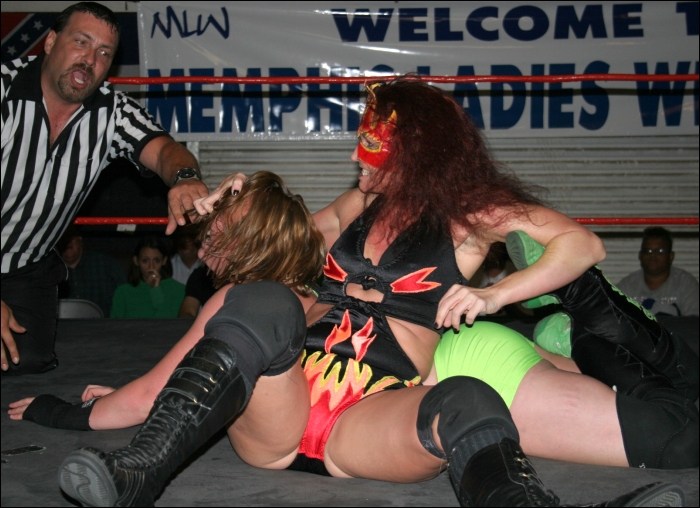 It became apparent to those in attendance at the MLW event that Tasha Simone wasn't so much interested in winning as she was in hurting, torturing and destroying her overmatched opponent. This hold proves it. A pin isn't going to come out of this maneuver...the out-of-control redhead is simply trying to hurt, plain and simple. Look as how she digs into the face once again with those fingers, reveling in the loud screams of her victim. See how she watches the referee? She's making sure that she can keep those clawing nails at work...doing their damage until the last moment before he forces her to break the hold!

Can it get any more vicious inside a wrestling ring than this? Well...

"You can shear a sheep many times, but you can skin him only once."