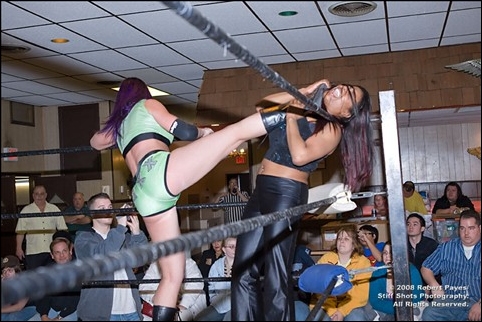 Yesterday we showed you Nikki Roxx posing with her title belt after this past weekend's victories earned her the WSU Championship. We'd like to say that Roxx won the title through hard work and good clean wrestling skills. But we can't...

Turns out that Nikki took plenty of shortcuts to the WSU title, starting with her team's victory over fellow G.L.O.R.Y. Girl Jana and her partner during the King & Queen Tag Tournament. There's no excuse to use a maneuver like this boot choke during a match...unless, of course, you could care less about the rules and simply enjoy hurting your opponent. 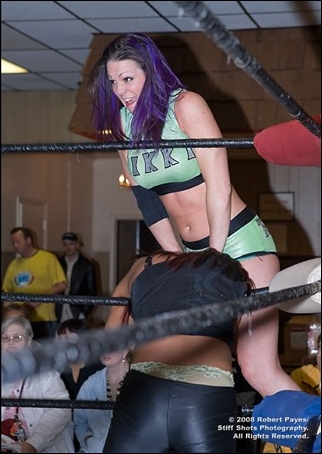 It sure looks like Nikki is enjoying the pain she's dishing out. Strangling Jana over the middle ring rope while the referee is distracted by other action, it appears that there's plenty of delight on the face of Roxx...a smile mixes with some extra effort as she works to keep her opponent incapacitated with the rope choke.

But the violent tactics didn't end with the punishment of Jana... 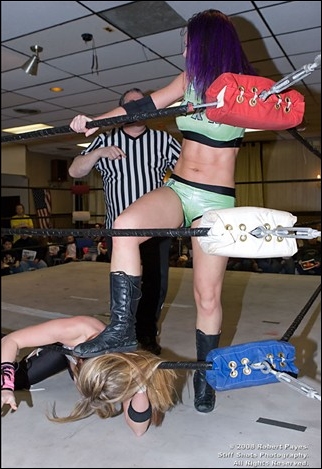 The punishment of her opponent continued in the WSU Title match, only this time Nikki's violent tactics were used against the sexy and talented Alexa Thatcher. Roxx showed her experience advantage as she worked over the challenger and took any shortcut she could...just like this boot to the back of Alexa's head to force yet another rope choke.

Should we congratulate Nikki Roxx for winning the WSU Title after seeing the illegal tactics she used to secure the belt? Or should Roxx be berated for not taking the title fair and square? We're torn. What do you think? Post your thoughts on the G.L.O.R.Y. Message Board and let us know what YOU would do if you were in our situation.