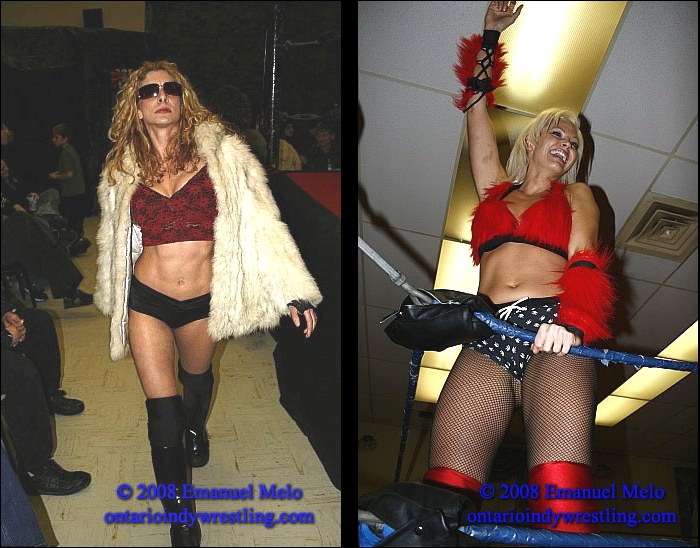 Canadian G.L.O.R.Y. Girls Danyah and Jennifer Blake battled furiously at PWA Extreme's February 16th show in Guelph, Ontario. Luckily, one of Ontario's top photographers was at the event and captured the action as these two talented, attractive and athletic ladies stepped to the ring to wrestle.

On the left, Danyah's fabulous abs are obviously the center of attention. You may not like the curly-haired blonde's arrogant attitude, but you've got to admire that muscular body. On the right, Jennifer dazzles the crowd with her smile as she jumps to the corner ropes to accept their cheers of approval.

Great shots of the girls! But the action didn't stay contained inside the ropes. That's where Emanuel's photographic expertise came into play... 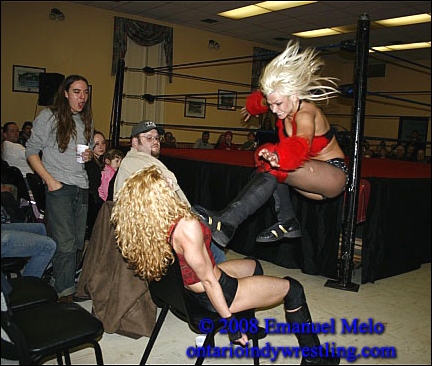 When the ladies' conflict spilled through the ropes and out onto the arena floor, Mr. Melo was right there to chronicle it. Here, Emanuel captures Jennifer Blake as she takes to the air and prepares to plaster Danyah with a flying boot directly to the chest...a blow that will send Danyah hurtling backwards in pain, but also leave Blake herself sprawled-out and dazed on the unpadded floor. Luckily, both girls could prepare (somewhat!) for the blow: we can see Jennifer gritting her teeth as she's about to make impact, while the tensing of Danyah's arms and shoulders prove that she knows something painful is coming her way.

On a side note, take a look at the fan who's standing off to the left and watching this scene. As "Air Blake" connects with the devastating shot, this fellow looks like he's not believing what he's seeing!