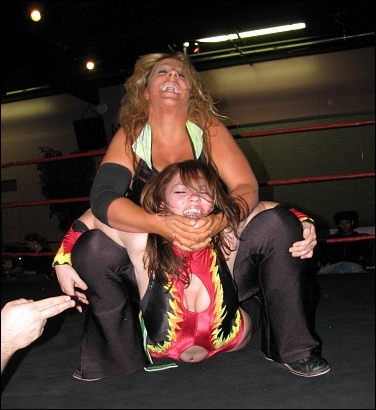 Their Pain = Her Pleasure!

Long-time G.L.O.R.Y. fans might remember Alicia as the smiling, innocent, rule-abiding crowd favorite who debuted as a G.L.O.R.Y. Girl back in the early 00's. Now, more than five years later, about the only thing that hasn't changed for Alicia is that smile. Except now that smile doesn't show up when she's accepting high-fives from fans at ringside...it shows up when she's punishing, pounding and delivering abuse to opponents in and out of the ring!

At last week's WWW event in Massachusetts, Alicia faced Natalia in singles action and she was doing much more than smiling. From these shots, it looks like the vicious blonde is having an absolute party! In fact, as she locks in this spine cracking camel clutch, Alicia actually seems to be in ecstasy as she listens to the screams of pain eminating from her victim. Talk about a transformation. In little more than half a decade, this sexy G.L.O.R.Y. Girl has gone from the fans' sweetheart to a sadistic ring punisher!

Everyone may not agree with her ring tactics, but there's no denying that as she delights in ravaging her opponents, Alicia looks sexier than any female in the ring today.

Want to see more action from this match and other WWW matches? You know you do! Head over to C. Sullivan's photo album on the Fotki photo sharing site. 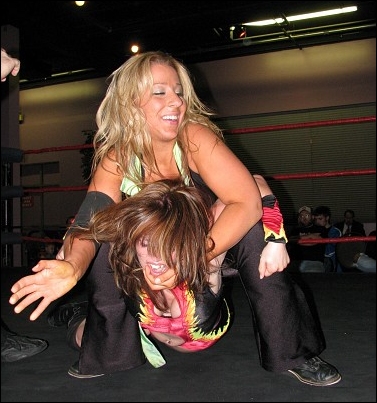