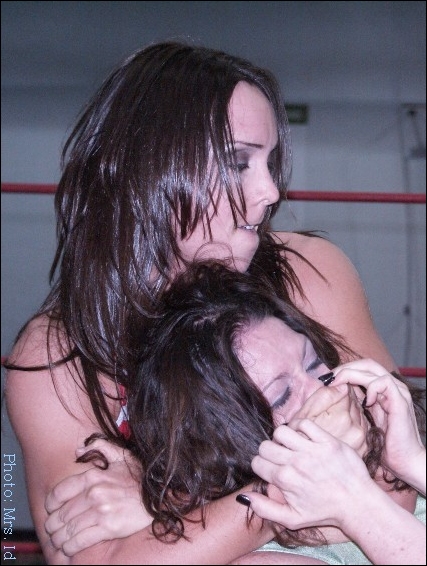 Sara del Rey = Out Of Control!

More action from the Canadian Wrestling Revolution Women's Tournament this past Friday night in Woodbridge, Ontario. Action might not be the right word. Torture might be a better way to describe what Sara del Rey is doing to fellow G.L.O.R.Y. Girl Nikki Roxx. What started out as a legal chinlock turned into a blatant attempt to smother a submission out of Nikki when del Rey slipped that hand over the mouth and nose of her opponent. Now we're certainly not medical experts here, but it's pretty clear to us that when you get in the way of the mouth and nose, breathing tends to be a rather difficult thing to do. And it looks like Nikki is already starting to drift into unconsciousness even as she tries to pry her attacker's hand from her face.

Is it just us, or has Sara del Rey become increasingly violent lately? Seems that Ms. "dR" has been going out of her way to work over her opponents in a ruthless and vicious manner during recent matches. Apparently, Sara is not about to let anyone get in her way when it comes to chalking up victories...even if it means leaving broken bodies and carnage in her wake!