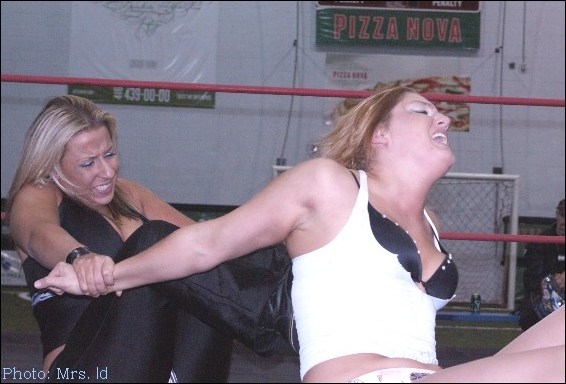 Canadian Wrestling Revolution held a tournament this past Friday night in Woodbridge, Ontario to crown their first-ever Women's World Champion. Many G.L.O.R.Y. ladies participated in the tournament, including Alicia. We may be wrong on this, but we think this is the first time that Alicia has wrestled in Canada.

We are certain, though, that the long time G.L.O.R.Y. Girl gave our newest G.L.O.R.Y. Girl, Haley Rogers, a rough welcome to the G.L.O.R.Y. roster! Take a look as the New Jersey blonde has Haley howling in pain as she plants the boots into the small of the Canadian's back and wrenches back on the arms. Alicia seems intent on dislodging those limbs from Rogers' body. 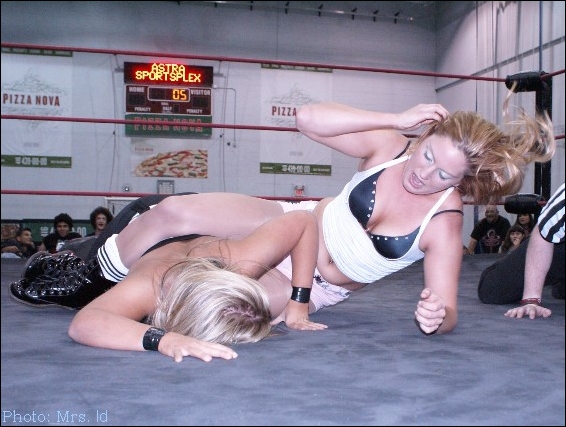 But Haley Holds Her Own!

But if you thought Alicia was going to steamroll our newest G.L.O.R.Y. Girl...you'd be wrong! Haley came back strong and took the fight to her US foe. It's all Rogers here as she crushes Alicia with a tight leg scissors. The blonde writhes on the mat in agony but Haley shows her no mercy as she simply tightens the vice-like grip she has on her opponent's ribs. In the end, it was Haley Rogers' arm that was raised up in victory by the referee.

Lucky for us that Gordo and Mrs. Id were at the event...taking pictures and chronicling the action for those of us who couldn't be there. More from the CWR Women's Tournament tomorrow!