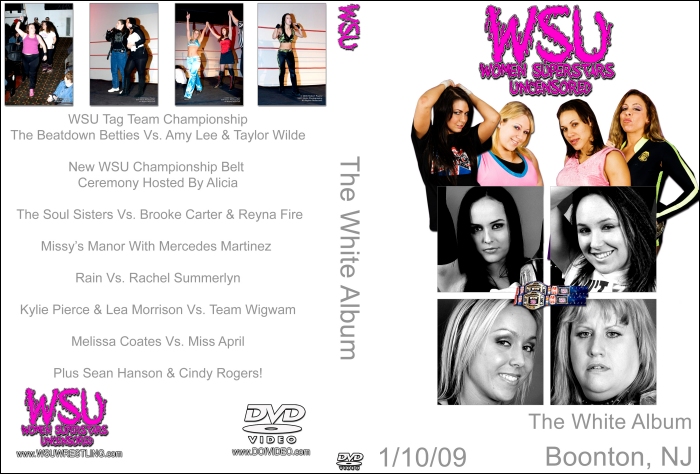 We've been seeing a lot of action from the Women's Superstars Uncensored early-January Boonton, New Jersey, event on our PODs lately. Well, WSU brass has just announced the release of that event, entitled The White Album. An appropriate title considering the ladies involved.

Forget about Sexy Sadie...WSU has Sexy Alicia returning to this event to host the new WSU Championship Belt ceremony. Roxie Cotton is in tag action here. And when Roxie is involved in a match, there's a good chance that if things don't go quite right for her, she'll Cry Baby Cry. G.L.O.R.Y. Girl Rain may have been singing "I'm So Tired" by the end of this event after being involved in two of her own matches as well as being a factor in the Orsini/Martinez cage match. AmyLee is in action here. By now we all know that for Amy, Happiness Is NOT A Warm Gun...it's beating the heck out of somebody! There was also a one-woman Revolution when Jana revolted against her long-time tag partner Luscious Latasha in a wild in-ring brawl.

This is a DVD that any G.L.O.R.Y. fan would enjoy having in his collection...even a fan Back In The USSR (although it might take a little time for the package to arrive in Moscow!).

Click over to the WSU site to order the DVD. And you can go ahead and hum a little Ob-La-Di, Ob-La-Da while you're adding the disk to your cart!