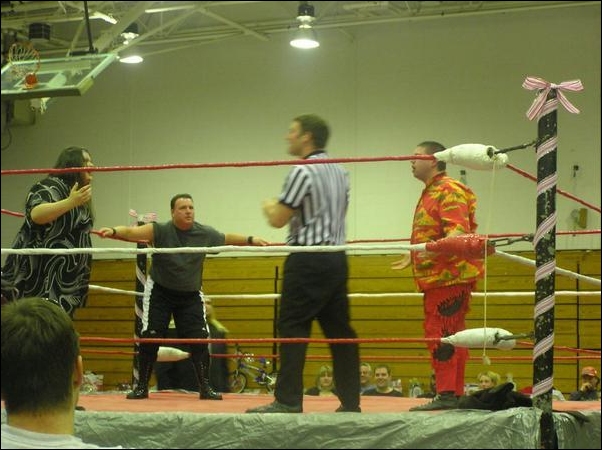 Rules vs. Rules? What Rules?

My apologies for the lateness of today's Picture Of The Day. The first storm of the season here in the Northeast had The Webmaster crawling along in snow and traffic-clogged roads for most of the day. It was a mess out there! Sorry about that. But, finally, here is your Friday, December 19th POD...

Husband vs. wife in the ring? It happened to one of our G.L.O.R.Y. Girls on December 6th during UWC's 13th Annual Toys For Tots event. How did it happen? Well, seems that UWC star Hubie Volk was scheduled to wrestle some jobber. (Volk always tries to sign a contract to face a jobber. It helps him to pad his record...but that's another story). When the jobber didn't show up, Joe Rules stepped up and cashed in his rematch contract to something called the "Interim United States Championship". Yeah, we know. We haven't heard of it until now either. But for Joe Rules, any championship he can try to steal...er, I mean...win is a worthy championship.

UWC Commissioner Mike Grim, who doesn't seem to hold Mr. Rules in high esteem, decided that it would be funny to put Joe's wife, Taylor Nicole Rules, into the match to screw him over. The match was turned into a tag three way, so chaos erupted when Hubie Volk tagged Taylor in after Joe had very stupidly worked her arm on the top rope earlier in the match. As you can see from the picture below, Taylor made her husband pay for that unfortunate lapse of judgement when she choked him into the corner pads with a big boot to the throat.

By the way, there was a Taylor Nicole fan in the audience. At least, we think this youngster was a fan. At least he took the time to make a sign...although what he had to say doesn't seem very flattering to us.

Joe Rules ended up winning by pinfall after Hubie Volk hit the G.L.O.R.Y. Girl with a handspring elbow and Joe clotheslined him in the back for the tag. Not nice!

And what happened after all the hoopla of the UWC event was over? Well, seems that Joe Rules spent a long, lonely night sleeping on the Rules' living room couch!

And one final note: What was Joe Rules doing in the ring wearing his pajamas?! 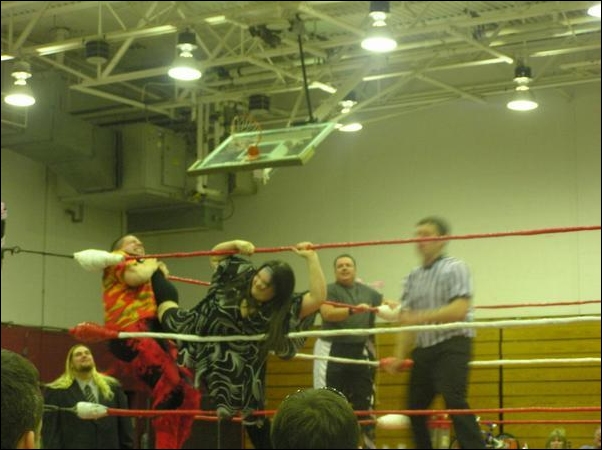 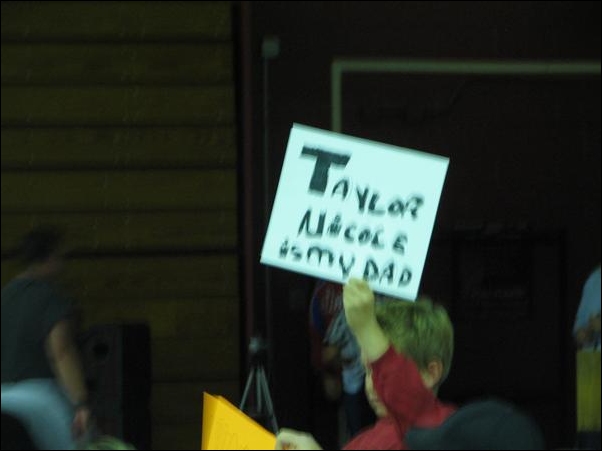 "What we see depends mainly on what we look for."