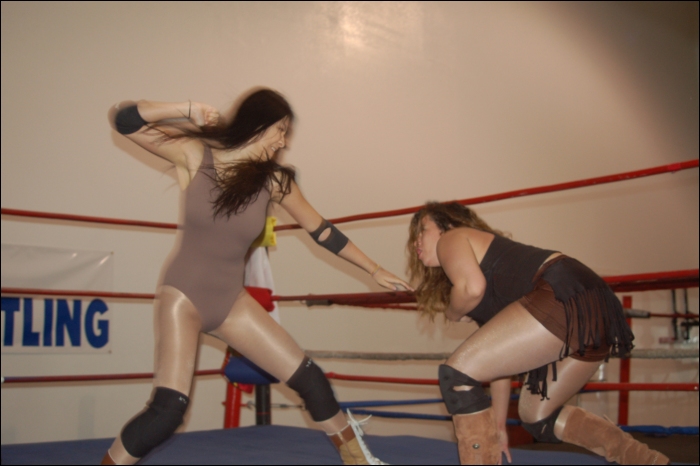 Yesterday we told you about the Memphis Ladies Wrestling event which will be taking place in Tupelo, Mississippi, two weekends from now. We don't know exactly what to expect from this fantastic roster of ladies in detail...no one can know that until all the fightin' and grapplin' takes place. But one thing we do know is that there will be plenty of action!

We discussed one highlight in Saturday's POD: the return to the ring of long-time G.L.O.R.Y. Girl Little Jeanne. Other highlights of this event are certain to be the matches involving the two G.L.O.R.Y. ladies you see above, Alere Little Feather and Su Yung.

These two ladies have already stepped into the MLW ring and, as you can see, they went to the limit to come away with the victory. There must be something about the MLW ring that brings out the worst (or, the more violent among us might say the best!) in these women. ALF and Su are usually rule-abiding wrestlers...relying on their technical knowledge and athleticism to boost themselves towards victory. But in this case, it looks like all that went out the window with the ringing of the opening bell!

A split second after rising to her feet, Su refuses to give Alere a chance to regain her senses as she prepares to crash a hard right fist directly to the temple of the Native American wrestler...a blow that will drive Alere back down to the mat. But once Little Feather gets control of the match, it's payback time in a big way (below). After a couple of turnbuckle smashes that knock the Asian-American princess for a loop, Alere steps up and puts all her weight behind a boot choke that crushes Su's windpipe over the lower ring rope. The referee may be counting...but it's certainly not fast enough for the rookie. It looks like ALF isn't even considering letting up on that choke anytime soon!

We don't know if these two ladies will be facing each other on October 4th, but there could be fireworks in Tupelo with both of these competitors simply sharing the same locker room! 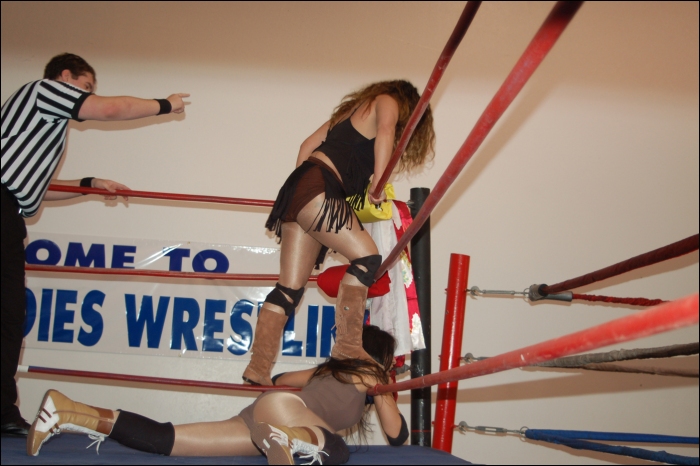 "As long as you believe what you're doing is meaningful, you can cut through fear and exhaustion and take the next step."