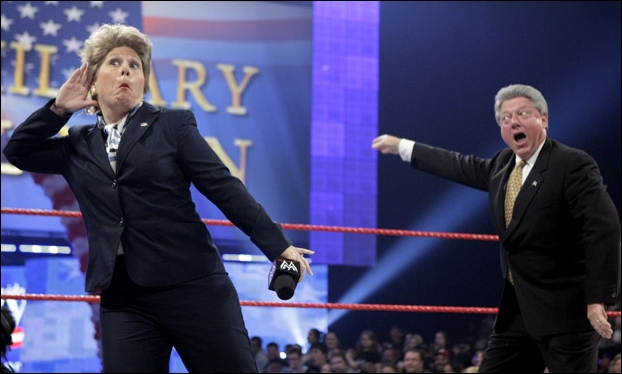 Last night's Monday Night RAW featured the contenders in today's Pennsylvania Democrat Primary squaring off for a political smackdown in the world-famous WWE ring. Yes, it was none other than Barack Obama vs. Hillary Clinton! Sort of...

Under that blonde wig, makeup and pants suit was our very own G.L.O.R.Y. Girl Lexie Fyfe! Problem was, right from the beginning, husband Bill did everything he could steal the spotlight. We know that Bill just can't stand all that attention being paid to his lil' pumpkin...and he proved it last night as he played to the crowd with Hulkamaniac poses while "Lexary" tried to address the crowd. 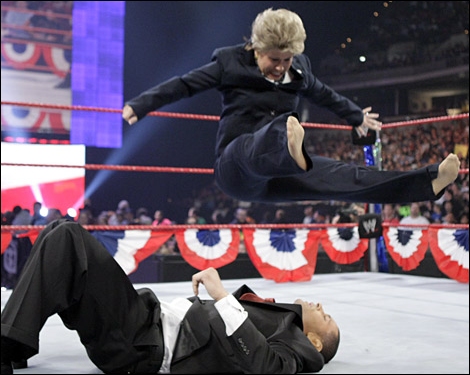 Laying The Smackdown On Obama

Once the match started, it looked like the would-be first female President was going to win big. A bodyslam on Obama was followed by a big legdrop to the chest...a patented Lexie Fyfe move which was appropriated by Mrs. Clinton for this match against the Junior Senator from Illinois.

It looked like the team of Hillary and Bill was cruising towards a win, until... 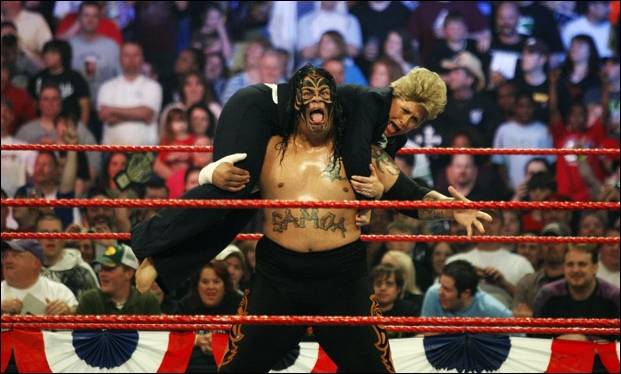 Umaga Gets The Final Vote

The match was interrupted when the gruesome Umaga stormed the ring and went on the rampage against both politicians. A Samoan Spike plastered Obama. Ever the political animal, William Jefferson Clinton approached Umaga trying to persuade him that he and Hillary should get his vote. But the WWE Superstar didn't see it that way. When Bill realized that things were going south fast, he bailed out of the ring and made a hasty retreat up the ramp. That left Hillary alone in the ring to absorb a devastating Samoan Drop.

Seems obvious to us that Umaga is a Republican...