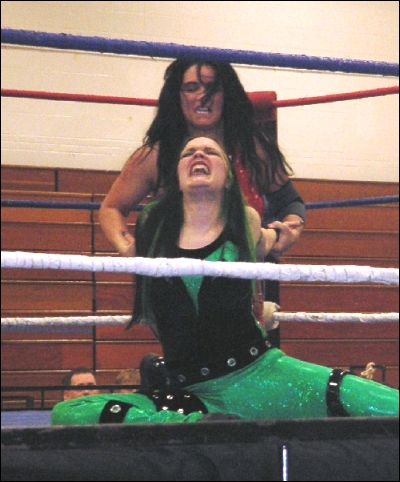 We've been showing you lots of POD action from the East Coast the past few days, but last weekend also featured G.L.O.R.Y. Girl action elsewhere in the country. Out midwest way in Fordland, Missouri, for example, 250 people plus were on hand to watch Ms. Natural take on MsChif.

Ms. Natural played her hand well early in the match as she captured MsChif in this seated surfboard hold. Look at the intensity on Natural's face as she bears down on the hold. It looks like she's trying to snap her opponent's arms right off her body! 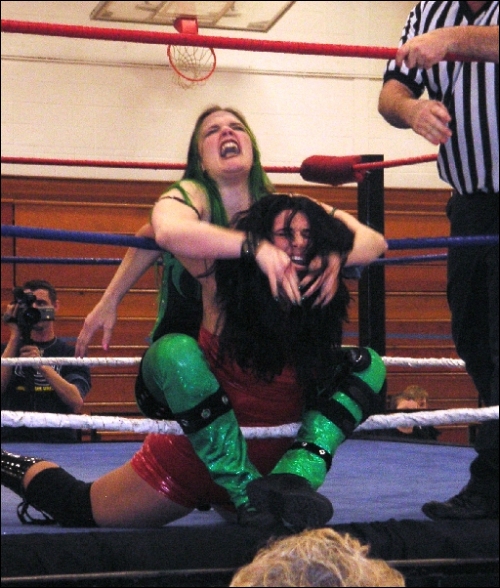 ...And MsChif Trumps Her!

When MsChif was able to get the upper hand in this match she paid Ms. Natural back...in spades! To us, it looks like Natural's surfboard hold used earlier in the match was trumped by this agonizing maneuver played by MsChif: a torturous camel clutch utilizing the ring ropes for leverage. It appears that every part of Ms. Natural's body is being racked and tormented...and yet, MsChif doesn't look like she's about to give up the hold!

In the end, it was the G.L.O.R.Y. Girl who came away with the win as MsChif was disqualified for trying to steal the victory with The Mist. It was Ms. Natural's arm which was raised in victory on this night. But these two ladies will be at each other's throats next weekend when they meet again in Sedalia, Missouri.