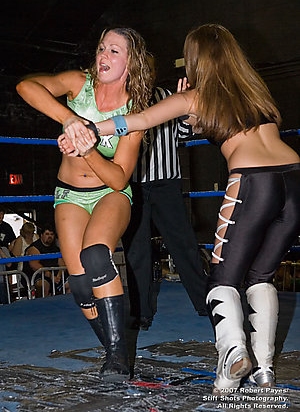 The last WSU Women's event in Lake Hiawatha, New Jersey, found G.L.O.R.Y. Girl Nikki Roxx taking on Alexa Thatcher in singles action. At this point in their match, Nikki is in control and seems to be happy as a clam as she works over Thatcher's arm while preparing to take down the young wrestler with a swift and effective move. 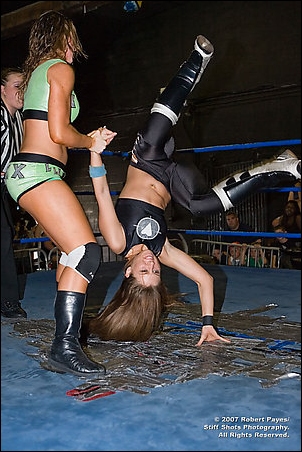 Ducking down under the outstretched arm and giving it a quick snap, Roxx sends Alexa flying head over heels on her way to a hard landing onto the mat. Nikki went on to win this hard fought match.

Lake Hiawatha, New Jersey, will be abuzz once again on September 22nd when the talented and violent ladies of WSU get together for another slam-bang affair. And you can be there courtesy of WSU and G.L.O.R.Y. Wrestling! Check out G.L.O.R.Y.'s front page for details of our contest/giveaway where you can win a pair of tickets to the upcoming WSU event...as well as a DVD of WSU's recent Women's Championship Tournament! It's fun. It's easy. And you just may win! Give it a try!