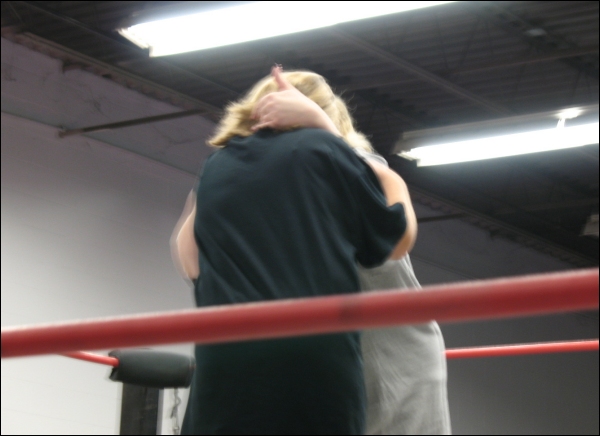 In today's POD, we hit you with a bit of a mystery. That's G.L.O.R.Y. Girl AmyLee in the gray tee-shirt locking up with a new opponent at her most recent wrestling practice. The girl in the black shirt certainly doesn't seem to be afraid to mix it up with the violent blonde heel. But just who is this mystery wrestler? 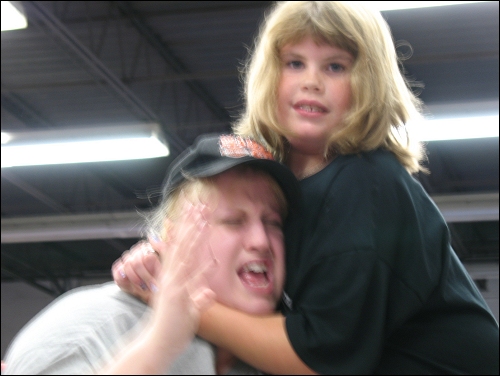 The girl who isn't afraid to step into the ring with AmyLee is none other than her niece, Jessica! The old grappler shows that she's a quick learner as she quickly has AmyLee screaming in a surprisingly tight side headlock. We have a feeling that there are not too maybe Barbie dolls in Jessica's closet. Our bet is that there are plenty of Hulk Hogan, Rock and Iron Sheik action figures though! 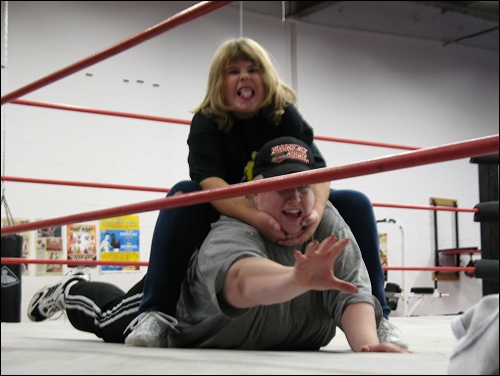 A Heel In The Making?

Speaking of the Iron Sheik, after seeing this picture we're guessing that he must be one of Jessica's favorites. Look at how she locks that camel clutch on AmyLee. You can tell she's studied the Sheik's technique well. And look at that face! She seems to be having way too much fun putting Aunt Amy into this painful predicament. "Babyface" is not something that looks to be a part of this young lady's future! 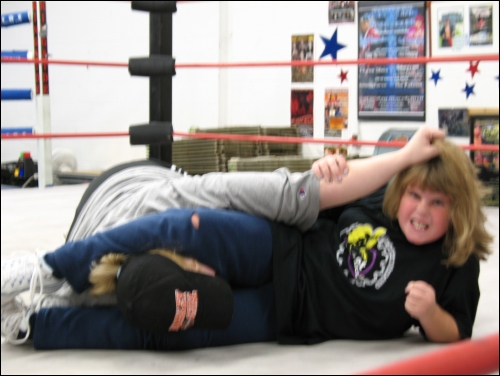 Boy, AmyLee really doesn't like to lose. Even if it's practice. Even if it's against her own niece! Just in case you started to think that AmyLee was getting soft, the biker blonde cements her bad girl reputation as she tries to fight her way out of Jessica's tough leg scissors...by going for the kid's hair! Come on, Amy! That's pretty low even for you! But from the expression on Jessica's face, we think it's going to take more than a little hair pull to get her to break that hold.

Coming in the November 9, 2016 Picture Of The Day: the debut of AmyLee and Jessica, a.k.a. "The Battling Bikers", in tag team action beating the living daylights out of two very unfortunate opponents!