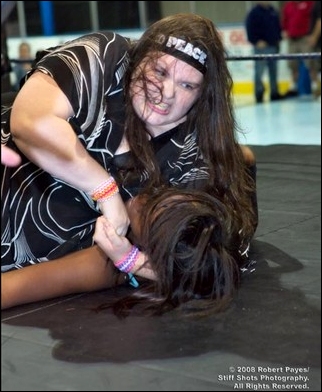 This past Saturday, A.W.E.S.O.M.E. (American Wrestling's Elite Stars Of Mat Entertainment) ran a show at the Winding River Skate Park in Toms River, New Jersey. One of the featured matches found G.L.O.R.Y. Girl Taylor Nicole Rules against rookie Athena Cage for the Jersey Shore Women's Championship. As you can see, the vicious Rules was as rough and tough as ever. Take a look at her as she puts everything she has into this side headlock down on the mat, gritting her teeth as she tries to crunch the skull of the challenger. 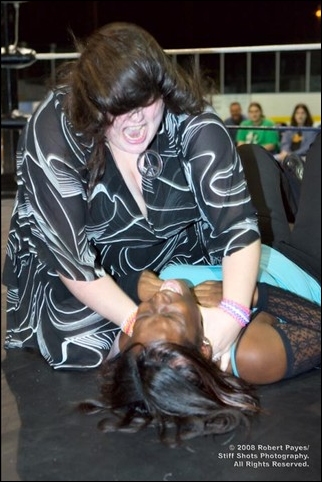 Is that a peace sign medallion we see hanging around the neck of Taylor Nicole Rules? Why yes...yes it is! How ironic. There's certainly no indication in this picture that the hippie grappler is practicing her philosophy of love and harmony during this match. Rookie Athena Cage was a long-shot to defeat the champion in this match for the Jersey Shore Women's Title...but Rules still didn't let up on her usual dirty tactics. Two hands to the throat have the young grappler gasping for air as she simply struggles to survive the assault, much less come away with a victory! 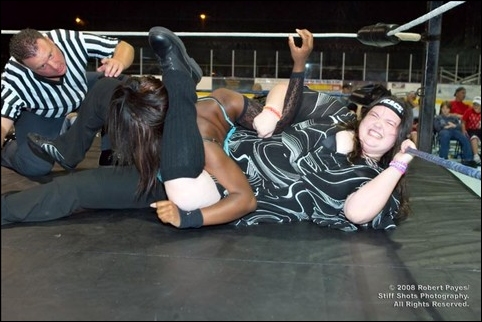 As the match continues, Taylor Nicole Rules remains on the offensive...and STILL relies on her cheating ways to keep in command of the match. Now, it's quite obvious at this point in the match that Rules is going to come away with the victory and retain her championship. But in applying this shoulder and neck stretching leg scissors, Ms. Rules still can't resist sinking to her cheating ways and grabbing the ring ropes for further leverage...even as Cage's screams of agony fill the arena. It's as if Taylor Nicole Rules has an addiction: an addiction to cheating! 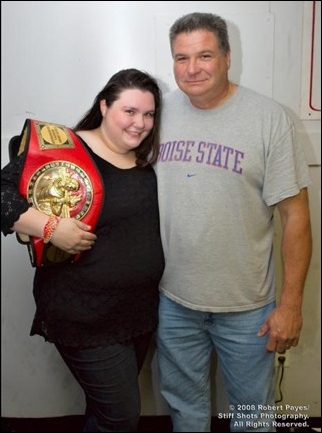 After the match...after her tainted victory...after completely destroying the young Ms. Cage with her vicious tactics...Taylor Nicole Rules smiles like a little angel as she poses with the #1 man in her life. No, not Joe Rules. That's Taylor's father! He looks like a nice enough guy. So how is it that he raised such a vicious and brutal daughter? Well, it's obvious. He did a great job raising her. It's that band of hippies that Ms. Rules has fallen in with who have negatively influenced her!

"What doesn't kill you will make you stronger."