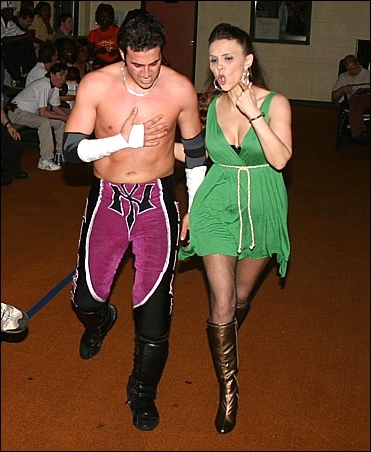 As usual, when Niles Young took on Don E. Allen at a recent ACPW show, he had manager Noel Harlow at his side supporting him, guiding him, cheering for him and interfering for him, of course!

As you can see, the pair were still discussing their match strategy even as they were heading to the ring. Well, we don't know if it was so much a "discussion" as it was Noel TELLING and Niles LISTENING. We weren't there so we can't tell you exactly what the G.L.O.R.Y. Girl said to her man, but after seeing some pictures of the match our guess is that it was probably something along the lines of: "Just leave everything to me, I'll take care of him". It appears that this role-reversal strategy worked as Niles distracted the referee while Noel did the serious damage. First it was a dangerous stiletto boot to the throat against the ring apron that wounded her man's opponent. Later, Noel utilized that middle rope to do some more effective choking. Apparently, Niles could have just taken the night off and let Noel win the match for him!

The pair have another ACPW show appearance set for June 28th. We wonder what their strategy for that match will look like. 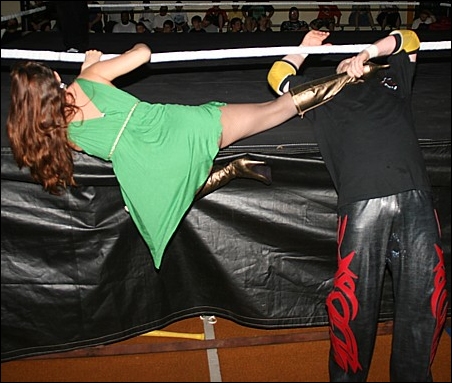 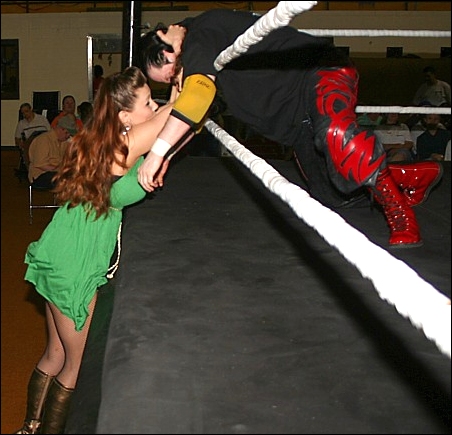 "To be a great champion you must believe you are the best. If you're not, pretend you are."