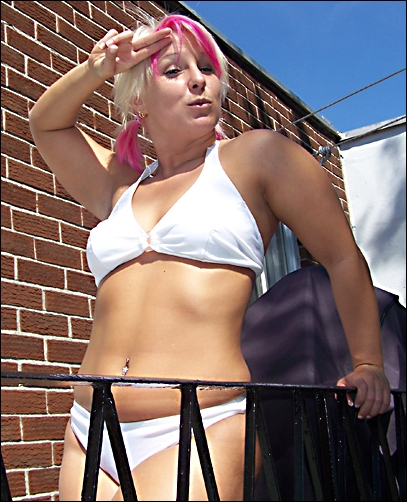 After being sidelined with some injuries over much of the past year, beautiful Canadian G.L.O.R.Y. Girl LuFisto has recently gotten back to where she belongs: inside the violent and hardcore rings of the Great White North! As long as we've known LuFistor, it's still hard to believe that this sexy and gorgeous lady puts herself into such dangerous and precarious situations inside the ring. Light bulbs, barb wire, steel chairs, metal garbage cans, thumbtacks...LuFisto has been in the ring with all of them, sometimes using the weapons against opponents and other times becoming the victim of them. What makes such an eye-catching beauty put her body on the line in such vicious matches?

If you don't believe just what kind of abuse this lady puts her body through, we offer the picture below as proof... 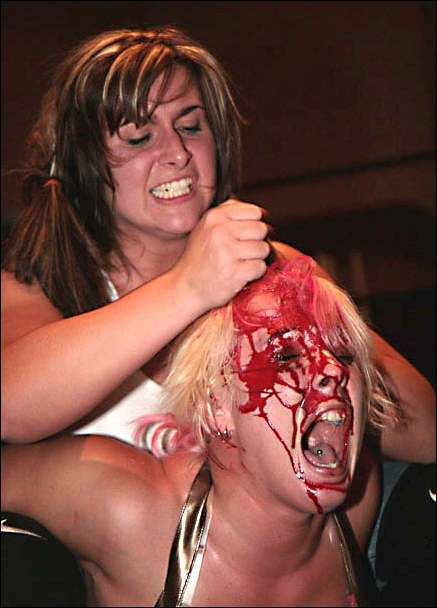 After getting bashed in the head and busted open by a steel garbage can brandished by her opponent, LuFisto finds herself drenched in her own blood as she's locked into a brutal camel clutch while her attacker batters and claws into her gushing head wound. LuFisto's body has seen tons of abuse over the years...and for her to be screaming like this is only one clue to the amount of pain she must be feeling. Unbelievably, LuFisto came back to win this match!