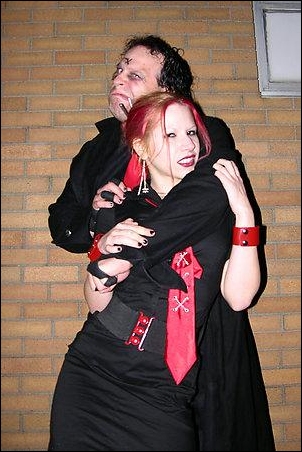 Foxy Foxxy And Her Twisted Gang

Lieutenant Foxy Foxxy poses with General Mikey Whipwreck at a recent NYWC event. These two are part of a group who call themselves "The Black Circle". Others in this twisted gang include Corporal John Cannon and Chancellor Crusher Doogan. At NYWC's next event...Table For Two: A Red Tie Affair...Whipwreck, with Foxy Foxxy and the rest of this lunatic posse at ringside, will face Dickie Rodz in a Double Tables Match for the NYWC Championship. Does anyone doubt that the nasty Ms. Foxxy will somehow interject herself and be a factor in this matchup?

And one other thing: what has gotten into Foxy that she would let herself get mixed-up with this kind of freak show?!