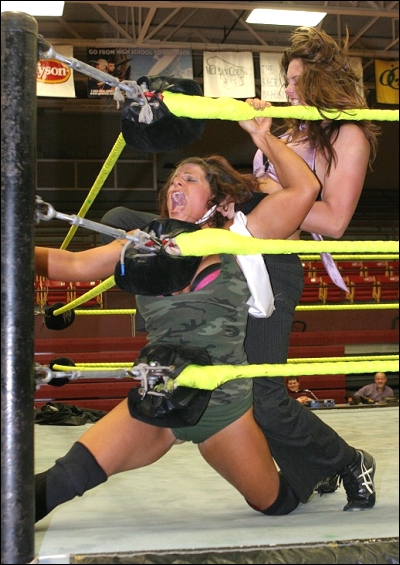 It's not often that we see ODB in a situation like this. Usually, it's the powerful G.L.O.R.Y. Girl who is doing the manhandling of her opponent...but not this time! That's OVW's Katie Leaa.k.a. G.L.O.R.Y.'s own Nikitawho is trying to choke the life out of ODB using a part of her victim's own ring gear. Is there any doubt now that Lea is as vicious as she is beautiful? Except... 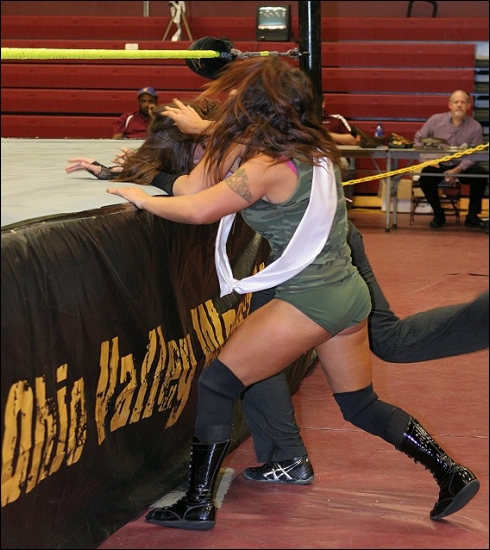 But Don't Count Her Out!

NEVER make the mistake of counting ODB out of a match! Before long, it's ODB who is on the offensive and Katie is the one feeling some pain. And it doesn't take anything much more complicated than a handful of hair and a brutal face smash into the ring apron. Who would have imagined that these two sexy and beautiful ladies could be so violent!

Want to see more from this match, as well as other OVW ladies in action from Calhoun, Kentucky's March 31st show? Then head over to Brian Gaddis' site for some great photos of the event.