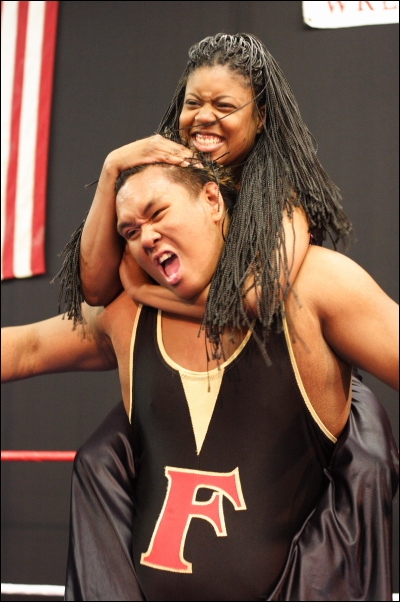 Last week, G.L.O.R.Y. Girl Jana and her IWF Wrestling compatriots were featured on the popular Fox 5 Good Day New York morning show. Fox reporter Anne Craig visited the IWF training facility for an up close and personal look at the world of pro wrestling. Just how up close and personal did she get? How about right inside the IWF ring in the midst of a wild intergender battle royal!

As you can see from the picture above, Jana held nothing back as she mounted the back of one of the biggest guys in the melee and clamped on a very effective sleeperhold. The face of her victim shows how devastating the hold is and, unfortunately for him, it looks like Jana is only going to be cranking it even tighter. 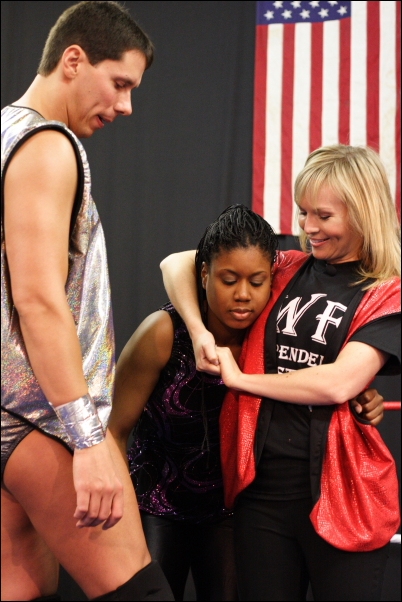 While at the IWF school, Craig also took the opportunity to learn a few moves herself. Here we see the blonde reporter learning how to apply a headlock on our girl Jana. That's IWF Head Honcho (and a very low-key sort of guy...NOT!) Kevin Knight giving her instructions on proper technique.

Later in the show, the reporter conducted a nice little interview with Jana...asking her why she enjoys being a pro wrestler. Jana did a great job, proving that she is not only a very tough and physical wrestler, but quite intelligent, photogenic and beautiful as well. So much for the false stereotype of pro wrestlers that some members of the general public hold!

Click here to see all the IWF segments from the Fox 5 Good Day New York show...including the interview with Jana...compiled into this YouTube video.